I’m a huge Star Wars geek so of course I had to read this book before going to see Rogue One. I wasn’t able to finish it before the movie but that’s okay. There wasn’t anything spoiled by seeing the movie that I couldn’t have predicted from reading half the book.

This story is set before the Rogue One movie. It begins after Star Wars III (which I prefer to pretend does not exist). Count Dooku is leading a separatist group in a war against the Republic which is led by Palpatine.

The story follows the life Galen Erso and his role in developing the weapon for the Death Star. Galen is a pacifist to the core and wants no part in taking sides. He wants nothing more than to be left alone to research his obsession- Kyber Crystals. Rumor is that these crystals are what power the Jedi and Sith Lightsabers. Much about them is unknown, and Galen means to learn everything he can about them. 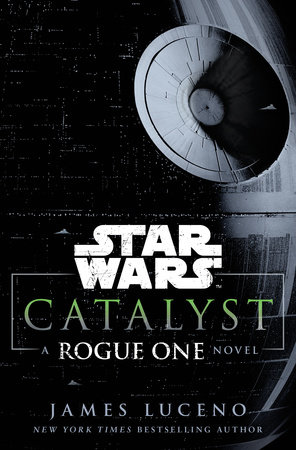 Lyra Erso is Galen’s wife. She is a perfect balance for him. While he is hyper-focused on his work to the point of obliviousness, she is understanding, smart, and world-savvy. I love her inner-strength and  competence. She is utterly devoted to Galen. The way this character is written bothers me. She is in my opinion what writers call a Mary Sue, which is a character that is too perfect. Lyra is the perfect counterbalance to Galen’s character and nothing more. The only flaw I can find in her character is that she runs off at the mouth to the wrong people at times, but to little effect.

Jyn Erso is Galen and Lyra’s daughter. She does not play a major role in this story since she is young at this time. I saw Rogue one this week and I love her in the movie! The movie was brilliantly done. I highly recommend seeing it.

Orson Krennic is an outrageously  ambitious man. He is in charge of building the Death Star. He is a brilliant strategist when it comes to political maneuvering. Unfortunately for him, he is surrounded by several other experts at political maneuvering, such as Governor Tarkin.  If you love political intrigue, you will love this book. Luceno is an expert at writing this kind of story!

First let me explain some writers terms. I will most likely refer to this occasionally, so it is worth explaining at least briefly.

Most all stories fit into something called the MICE Quotient. Orson Scott Card created this categorization of stories.
M=Milieu, the story is all about an amazing place. ex. Ringworld by Larry Niven or The Hobbit by Tolkien
I= Idea, the story is all about an idea and explores various aspects of this idea. ex. The DaVinci Code
C= Character, the story is about the evolution of some aspect of a character. The vast majority of YA novels are coming of age stories which are character stories. These are the stories which I personally adore. One of my favorite examples is the Harry Potter series.
E= Event, these are centered around an event. ex. Independence Day (movie)
Most stories are primarily one of these types, but contain elements of the others to greater or lesser degrees. If you want to know more, or read a better explanation please hop over here or here.

Like many Star Wars novels, Catalyst is part Milieu. It describes alien races and worlds. To me, it felt like a mini info-dump every time a new character was introduced. Yes, it is important to know that the alien is insectoid in nature and his legs are backward hinged. You meet a ton of aliens and that means a ton of description for characters that are often only in one scene. I know several students who delight in this kind of thing.  I don’t.

This story has elements of an Event story. The event being the creation of the Death Star and how it came to be.

I love the ideas about the Force and Kyber crystals presented in this book. I don’t want to go into details and spoil the book, but the Star Wars Geek in me loved learning more about all things Jedi. Galen being a man of science looked at it with a scientist mind, rather than a mystic perspective that we usually see from the Jedi.

George Orwell said, “Never use a long word when a short word will do.” This author does not abide by this rule.  I can appreciate a person with a large, sophisticated vocabulary. I, being a geek, have many friends who love to use delightfully large words. In writing though, I appreciate clarity and simplicity above fancy words. In science fiction, fancy words are sometimes necessary. In this book however, I found myself talking back to the book saying, “You could have just said ‘big’.”  This is a minor nitpick of mine. One does not read Star Wars books for their literariness; we read it to be entertained. Bottom line, I was entertained.

Anyone that loves political intrigue, science, and all things Star Wars. Younger readers might struggle with the vocabulary, techno babble, the political maneuvering, and complex, multi-thread plot. I have a couple of high level readers in my 6th grade class that might tackle it. They won’t get all the nuance, but that is okay. I think a 14 year old would be able to read it comfortably.  People who love Milieu and Event stories will like this one.

Foul Language: None.
Violence: Nothing graphic
Sexual Content: None
Substance Abuse: None
Over all rating: G