Now that my first novel manuscript rough draft is done, you might think I’d start on revisions. Not quite. Often writers need time and distance from a rough draft to do a good revision. I recently began grad school so I will likely set it aside for 2 years while I work on my MLIS.

If you know any writers, you probably know that writers can’t just stop writing altogether.  I will be working on writing some short stories when I have a spare moment or two. The problem is that I don’t read many short stories. You can’t write what you don’t read if you are going to be good at it. I desire to write well. So the solution is to find short stories to read. I read some magazines with short stories which I didn’t care for very much. The beauty of short stories is they involve little investment of time. If you don’t like it, you are not out much time. However, if you love it, then it is over too quickly. That is why I historically haven’t spent much time reading short stories. For me the bigger the book the better. But I need to learn the craft of short stories. So I found L. Ron Hubbard’s Writers of the Future Volume 33. If they have 33 Volumes of it, then it must be good, right?

*Disclosure: I received this book from NetGalley in exchange for an honest review.

The first thing I noticed is that when you get a book from NetGalley it is sent out before it has been formatted all pretty. There was no table of contents or titles for each story. So I apologize for not giving credit where credit is due to each of the authors. If I was reading a regular novel instead of an anthology, this would not be a problem. Live and learn, right? 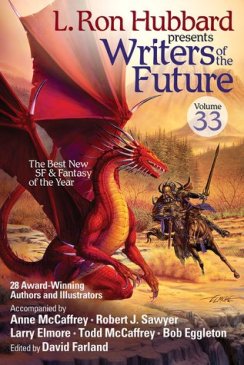 Here is a quick teaser for each of the stories in the first half of the book:

The first several stories were very enjoyable. The first story was a locked room mystery set on the moon! The writing was excellent. The ending was not as clever as I had hoped it would be though.

The second story was about a man in a Mech, a mechanical robot used in battle. He was injured on the battlefield and knew it was really bad. He went home to see his family one last time. The description in this story is gritty and the emotion is visceral. This one did surprise me. The ending was quite satisfying, which is rare for me. I often find short story endings too abrupt. This one was well done in my opinion though.

This one is about an alien being, called the Envoy.  The Envoy is revered as something holy. The most recent ambassadors did not return. A team has been sent to get them back. What they find shakes their faith. What they find makes them look at what they know about the entity with more knowledge. This one was very interesting. I do like the perspective and the introspection in this story.

I didn’t care for this story. It was a story about a man in a lifeboat from what I could gather. It was one of those stories where the POV character is hallucinating and doesn’t really know what is real and what is not. I don’t usually like that kind is stories-; concrete stories are better.

The next story was about a man who fell in love with a selkie. There just aren’t enough stories about selkies. This one was powerful with emotion– heart-rending. This had a satisfying ending but I still wanted to hear more of the story.

This story is about some beings that do not have a corporeal form. This story makes me wonder, if when we explore space and start finding other life forms, will they be more advanced than us or more primitive. This story is a fascinating test of humanity.

Ready for a good old ghost story? Do you like ghost hunters? This one had a twist though!

Varga and Fiske. Fiske is just a simple hunter. Varga is a warrior. The lanky hunter must guide Varga into the mountain where strange things have happened and people have disappeared. They find the shredded remains of a campsite.  The creatures are something I’ve never heard of before. I’m curious to know if this was the author’s creation or an obscure myth they dug up. Either way, I love this monster! As a reader, I was torn between pitying the creature and hating it! Well done! I think this one was written by Anne McCaffrey.

I liked this one quite a bit. It is about a boy whose mother is dying. To save her he must kill a rare bird which is special to him. This author writes internal conflict well.

That is just the first half of the book. I may go back and reread some of these. They could teach me a lot about writing internal conflict in a very short time. I recommend you read this book!

What I like best about this book is that the endings were really good. I normally strongly dislike the ending of short stories. Usually, they leave the reader to figure it out from the clues they laid out. They literally drop the end off: they hint at the resolution and completely omit the denouement (falling action). They cut the story off right where the line is between the middle and end in the diagram above. I guess I’m a lazy reader. I’d rather not have to put the clues together and figure it out. I like to see the story come together and simply must have a resolution and have at least a tiny bit of denouement to be happy at the end of the story.  The vast majority of these stories had sufficient resolution and denouement to make me happy.

This book has a little bit for everyone that likes some form of Science Fiction. There is something for those who like alien stories, ghost stories, outer space stories, technology stories, mythological creature stories, and even a mystery. This will also appeal to anyone who likes nearly instant gratification since you can sit down and read a whole story in less than an hour.

In the first half of the book…
(and likely the second half as well.)

Foul Language: None
Graphic Violence: None
Sexual Content: None
Substance Abuse: None