Dan Wells is also on Writing Excuses with Brandon Sanderson, Mary Robinette Kowal, and Howard Taylor. This is the second book I’ve read by Dan Wells. The first one I read a few years ago is called Partials. It was a good story centered around a brilliant idea, but it got a little too teenager romancey for my personal tastes. I picked up this book in May, which is crazy busy time for teachers. I sat down to read it for a few minutes. I got sucked in and stayed up later than I should have stayed up. If I was going to function properly, I was going to set this book aside until I could sit and read it straight through. I set it aside until this week, when I finally had a day with a little down time. You’d be surprised how busy teachers can be over the summer. The book did not disappoint!

I am Not a Serial Killer
by Dan Wells
Genre: Horror
John k 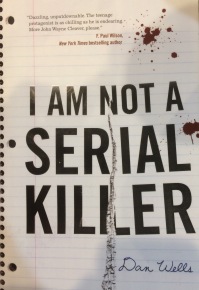 nows he is not like other people.   He obsesses over things, one of which is serial killers. As he studies serial killers, he realizes he has all the character traits that serial killers usually have. He is determined to not become a serial killer though. He has rules for himself to prevent this from happening.

When a serial killer shows up in town, he is determined to stop him. He must do this without losing himself in the process.

This character is brilliantly written! The way he describes through John Cleaver’s eyes shows you how differently this character thinks. This book is great for teaching characterization through POV description. The content is somewhat mature though. Obviously some of the description is gruesome as it describes the murder victims, more so because John helps his mom prepare these bodies in the mortuary where she works. I am a wimp when it comes to horror, so I found some of it disturbing. The kids who are not bothered by horror stories will absolutely love it!  There were no cuss words, drugs, or alcohol use in this novel. So over all a very clean but gory story. That sounds oxymoronish doesn’t it? I usually only read the first book in a series due to my massive to-read list and lack of time, but for this I will probably make an exception because the book was so good.

3 thoughts on “I am Not a Serial Killer”